Sharanjeet Kaur has been looking for her mother’s Australian tourist visa to be approved for six months from now.

Sharanjeet Kaur Tasmania-based women was waiting for celebrating her 35th birthday in the company of her parents, but an unexpected delay in obtaining a visa for her mother has shattered her dream.

Ms. Kaur told SBS Punjabi that, On August 18th, 2018, She had applied for a visitor visa for both her parents. But her mother Surinder Kaur’s visa approval is still pending while Nirbhai Singh’s (her father) visa was approved within ten days of lodging the online application.

Ms. Kaur told SBS Punjabi. “It’s been nearly six months and we have received no correspondence whatsoever from the Australian High Commission in New Delhi,” she added “Every time I call their helpline, they ask me to fill an inquiry form,”

Even after filling at least six inquiry forms, none have pushed the case in any direction.“My Mom’s case has been unusual since the very beginning,” told Ms. Kaur.

She added further that the complications grown more as  “When we were filing her application, we would get a message that the applicant already has a valid visitor visa, but when we’d check VEVO (Visa Entitlement Verification Online), till date it shows that she doesn’t hold any such valid visa.” 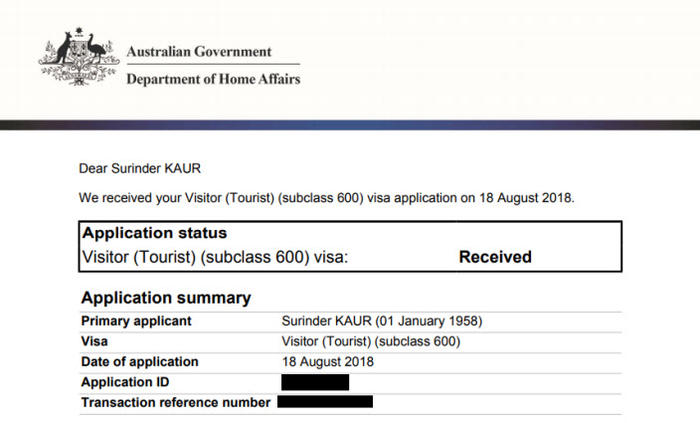 A snapshot of acknowledgement received from the Department of Home Affairs

Ms. Kaur succeeded in filing the application for her mother despite the confusion over Surinder Kaur’s visa status. she even got a confirmation from the Department about that.

Immigration Agent Subhash Khattar told SBS Punjabi  “Typically, it takes about 20 to 33 days to process 75 to 90 percent of the applications in this category.”

“But sometimes factors like traveling for the first time, or medical history can also cause unprecedented visa delays particularly in cases involving elderly visa seekers,” he added.

But Ms. Kaur said these factors doesn’t support the delay as her mother is neither a first-time traveler nor she has any medical history that can seemingly impact her approval.

According to Australia’s Tourism Export Council (ATEC) recent report, the delay in processing times for Indian visitor visas indicates costing Australia’s Tourism Industry $500 million a year. At the same time bucking a trend where tourists have started to look for other locations with faster visa systems.