Indians residing in Canada are taking their immigration journey a step forward, with several thousands opting for Canadian citizenship, after having lived in the country for the specified duration as permanent residents.

As country of birth, India figured in the second highest number ofapplications from those claiming Canadian citizenship. Philippines topped this list by a slender lead: 15,600-odd Filipinos became citizens of Canada during this ten-month period, but this was a marginal increase of 11% compared to the traffic from Philippines for the entire 12 months of 2017.Unlike a permanent residency (which is akin to a green card in the US), a citizenship grants more benefits, such as greater mobility, eligibility to work in the government sector, and obtaining the right to vote.

David Nachman, managing attorney at NPZ Law Group, points out an important facet of mobility, “A Canadian passport (citizenship) also facilitates individuals to apply for a Trade National (TN) visa to enter and work in the US.” While this is similar to the H-1B work visa it is not subject to the annual cap and is easier to obtain.

According to the Immigration, Refugees and Citizenship Canada (IRCC), the federal department which facilitates arrival of immigrants to Canada, an estimated 1.53 lakh people would have obtained Canadian citizenship by October 2018—being a year from the date the new relaxed norms for citizenship came into effect. This estimate is an increase of 40% compared to the 1.08 lakh people who obtained citizenship in the same period the year before, adds the IRCC in an official release.

IRCC adds that after the changes in the regulation, during the nine-month period from October 2017 to June 2018, it received 2.42 lakh applications for citizenship, more than double the previous corresponding period. Despite this, the processing time continued to be within 12 months. 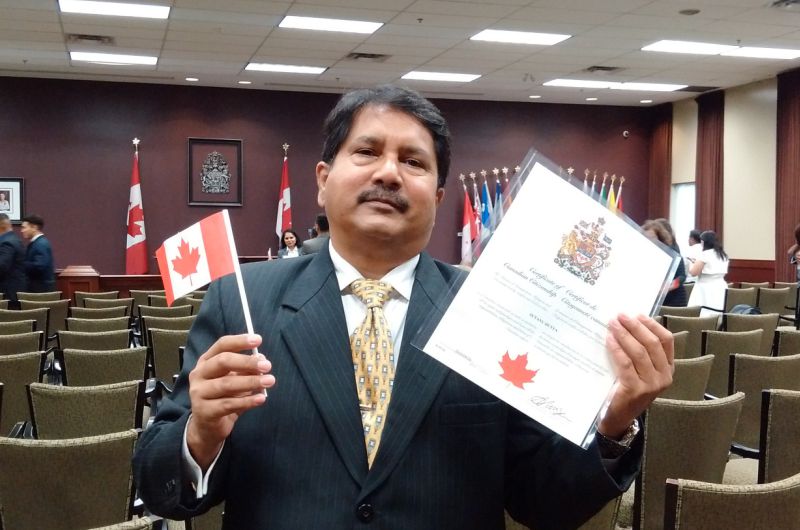 There are also many individuals who have not yet obtained Canadian citizenship, who commute daily from Canada to US for work. Hari (last name withheld) has a Canadian Permanent Residency, and currently works in the US on an H-1B visa. He moved from US, a little over two years ago, to enable his wife to obtain a job. Hari describes his daily commute between Windsor area in Canada and the US border town of Detroit as easy. “The H-1B visa is a non-immigrant visa, and my daily commute is not regarded as my having abandoned permanent residence in Canada. I will however, have to prove that I returned to Canada each day and cross-border tax implications have to be dealt with.” Long term, he plans to obtain Canadian citizenship and work in Canada as the tech sector there is expanding.

Indians top charts for PR status India with 51,651 Indians (or 18% of the total) admitted as permanent residents (PR) during 2017, emerged as the top most source country. This was a rise of 30% over the previous year. It toppled Philippines, with 40,857 Filipinos getting entry into Canada as permanent residents, followed by the Chinese with 30,270. In all 2.86 lakh individuals were admitted into Canada as permanent residents. These statistics are detailed in the ‘2018 Annual Report to Parliament on Immigration’. The Canada Immigration Levels Plan for 2019 to 2021 reveals that more than a million new immigrants will be admitted over three years. The trend is likely to continue given the growth of the tech sector in Canada and protectionist regime of the Trump administration. TOI had, in its front page of June 15, pointed out the trend of H-1B workers, migrating to Canada.