From an economic perspective, India is projected to be the world’s fastest growing economy, with an annual GDP growth rate of around 6.5% and an attractive trade partner.
India has been demanding status as a “data-secure nation”, which will reduce compliance costs for Indian software providers.

“A trade deal not only could help strengthen India’s Commonwealth ties but also a chance to increase pressure on China and other Asian countries to liberalise their trade” – according to India.
Since 2007, a free trade agreement (FTA) has been negotiated by India and the European Union but the talks stalled in 2013 after 16 rounds, only resuming in 2018, regardless of growing trade between the EU and India. Unlike the case, there has been a talk in Brussels that Brexit might help remove some of the hurdles to an agreement.
Even though this will not be straightforward, if anything, the UK is better positioned to secure a trade deal with India than the EU. To negotiate a manageable set of strategic priorities, future UK-India FTA talks may well be an opportunity as the UK’s desire to curb immigration is likely to lead to tough negotiations.
Over 2002-18, trade in goods between the EU and India grew by three times from €28 billion to €91 billion. Nearly about 13% of India’s total trade in goods in 2017, the EU is India’s largest trading partner whereas India contributes around 2.3% of total EU trade being the EU’s ninth biggest trade partner. 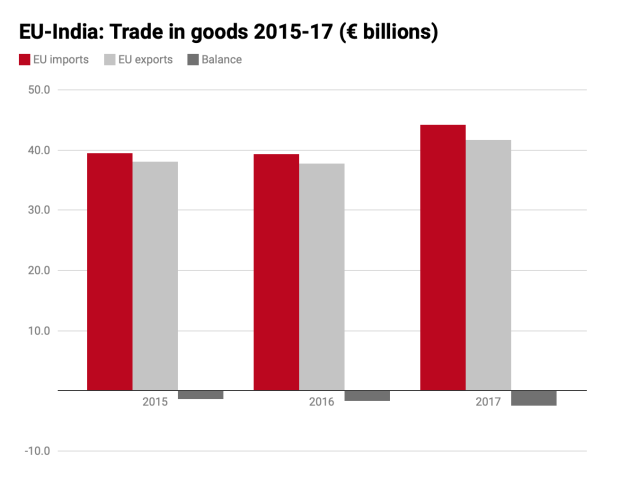 Another important component of EU-India trade is the services. Indian services exports to the EU were €16.6 billion in 2018, while imports were €17.1 billion, according to the data shown by Eurostat. The sector has also attracted foreign direct investment from the EU, including Germany, France, Italy, Belgium, and the Netherlands, as well as the UK. 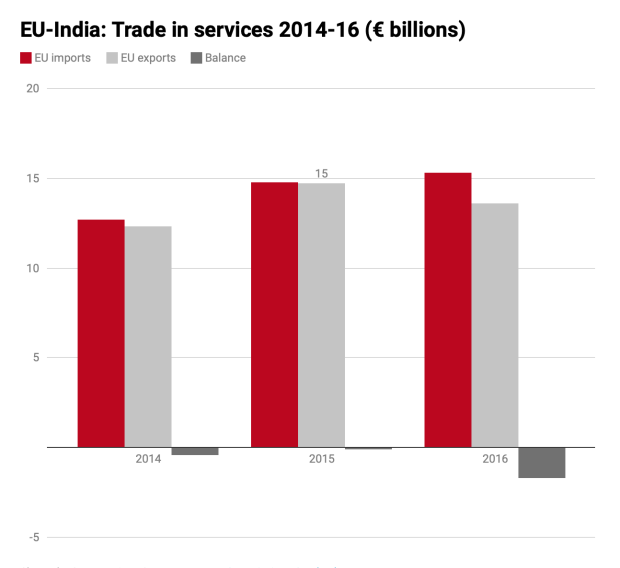 In 2013, the talks between the EU and India broke down after it became clear that the inclusion of social, environmental and human rights clauses, as well as reaching an agreement on the demands for tariff reductions and market access, would be impossible. In 2018 discussions restarted, which led to the declaration of an EU-India strategic partnership. This agreement mainly reaffirmed current ties rather than tackling any of the issues that caused the trade agreement discussions to stall initially.
Drug patents, tariffs for second-hand cars, agriculture, services, rules of origin and an unacceptable list of sensitive items are the main sticking points, according to the EU’s perspective. On one side, where India is unwilling about negotiating a stronger intellectual property regime and a sustainable development chapter with social and environmental clauses, the EU is adamant to include all of these points in the trade agreement. Also, the EU wants detailed provisions for investor-state dispute settlement (ISDS) after India cancelled 20 bilateral investment protection treaties with individual EU countries in 2016 (https://hsfnotes.com/arbitration/2017/03/16/mixed-messages-to-investors-as-india-quietly-terminates-bilateral-investment-treaties-with-58-countries/). Even before pursuing a claim under international law, current regulations require foreign investors for a period of five years to resolve their problems in Indian courts and the ISDS demand is not acceptable to India.
Particularly, India wants its skilled workers to be granted by more visas in the services industry and has been demanding status as a “data-secure nation”, which will reduce compliance costs for Indian software providers, therefore, views the proposed trade deal as a longstanding demand or an opportunity to address problems it has with the way the two sides trade in services.  But, it is unlikely that the EU will agree to this demand as per the concerns given by the EU over regulatory norms and data-privacy standards. After Brexit, this demand is unlikely to fade.

The UK’s exports of alcoholic beverages from 2002-18 registered a significant increase from €14m to €162m whereas machinery and transport equipment accounts for nearly 20% of total UK’s trade with India constituting 40% of India’s exports. 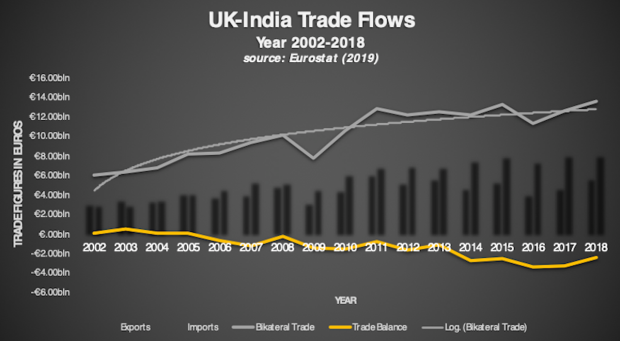 In 2018, with a trade totalled  €13.6 billion, accounting for 17% of India’s overall trade with the EU, the UK is among India’s main trading partners, as per the reports of EU Bloc. Moreover, between 2002 and 2018 the average rate at which the trade between India and the UK increased is 8.8% a year.
From an economic perspective, India is projected to be the world’s fastest growing economy, with an annual GDP growth rate of around 6.5% and an attractive trade partner so for the UK, the lack of progress in EU-India trade talks might just be an opportunity to launch its own negotiations for a trade deal with India. Plus, India is a home to almost one-fifth of the world’s population that’s why could be a strategic partner for the UK in Asia, presenting an opportunity to increase Britain’s soft power in the region because it is predicted that the GDP of the UK would grow by just 1.5% in 2019.
“A trade deal not only could help strengthen India’s Commonwealth ties but also help India’s geopolitical considerations in the region given the history of tense diplomatic relations with Pakistan and a chance to increase pressure on China and other Asian countries to liberalise their trade”, according to India.
However, visa numbers, intellectual property, reducing tariffs and their respective imports are the remaining issues on which the UK and India would still have to agree on. Moreover, the free trade talks between the UK and India could still be long and drawn out because these issues were with the EU, and could yet prove contentious.
Brexit, eurozone uncertainty, trade tensions from the Trump administration’s pursuit of a protectionist agenda and sluggish global growth rates – all are the recent political developments that could well nudge the partners to review their red lines and return to the negotiating table as all have serious implications for future trade talks.